What a fantastic morning…

Two Fish Divers Lembeh had an awesome morning of diving today!! Firstly we saw many ( we counted 6 ) Pygmy Seahorses, Pegasus Sea Moths and much more at 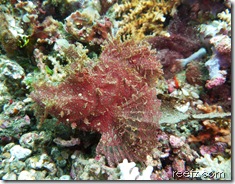 Nudi Retreat. The dive was nice and relaxing, good viz and no current!! We then moved onto our second site and saw this magnificent Weedy Scorpionfish ( Rhinopias frondosa) . I was particularly happy as it was my first sighting of the famous Rhinopias – they could probably hear me cheering on the boat!!

The Weedy Scorpionfish is a solitary creature and you’ll find him hanging around rubble area between 8-25m. They come in many colours ranging from lavender to red.

Some of our divers were lucky enough to see this giant mimic octopus  (Thaumoctopus mimicus). The Mimic Octopus are active during the day ( we will soon be posting some awesome footage of this guy – keep an eye out!!), playing by themselves or hiding on sandy bottoms.  It is known to mimic up

Thank you to Frits and Steve for these lovely photos and to everyone for an awesome morning of diving!!