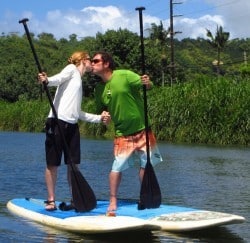 There is a song with a lyric that states that “home is where ever I’m with you”. For me the “you” is a wonderful redheaded girl named Sara and where ever we are together is just fine with me. But other things add to that feeling of home.

We have now been here in Indonesia for over a month and more and more,it really does feel like home to us as well as feeling like we have been here longer than we have. When Sara and I started to date, it felt odd answering when people would ask how long we had been dating because it hadn’t been that long but because we had a decade of friendship behind us it felt longer. It is a similar feeling with living here in Indo. The lifestyle and pace of life is one that we have wanted and emulated in our lives for some time now so now that we are here and living it, it feels like we have been here all along.

A lot of the staff here at Two Fish Divers are locals, 99% give or take and now that we are familiar faces, most all of them are saying hello in the morning, afternoons and any time we meet or pass. The ones I thought were a bit stand offish at first, I find out are really just shy. They are also some of the nicest once they open up to you.

Dolfi is really shy, he is also a former diver and the compressor man as well as the equipment room guy. Sara and I have both had the pleasure of spending time with him while learning how to fill tanks and repair and clean regulators as well as some of the other gear. For the first week or two, he was always off in the shadows working on something and you were lucky to get a grunt from him in response. Slowly that changed as we would say good morning or thank you in his language. Now after spending some time learning from him and taking the time to ask about his life, he always calls out to us as we pass by and is answering more and more questions about his language for us. Most of the employee’s here have had to teach themselves English so I believe that they are please to hear us trying to learn their language of Bahasa.

Dolfi is just one of many though, each morning we are greeted by so many new friends as we walk to breakfast or around the dive center. Salamet Pagi…… (good morning) rings out and we see smiling faces every where we look. It reminds me of walking into the Bellatazza Coffee Café back In Bend Oregon where both Sara and I worked. It was more of a family atmosphere than a co worker one. People asked how you were and you knew they actually cared about what you had to say. Two Fish Divers has built a business in this same manner. Employing locals and giving them opportunities to move up in the company and provide a good life for their families. In doing so, they have become one big family.

During the first part of our time here, I had the pleasure of meeting and diving with Rollie, who looks like he could be 20 years old but is actually 31 with a wife and 5 year old little boy named Sebastian. As Sara put it, we got along like we had been friends from grade school, laughing and joking around with each other. When Sara and I returned from week Lembeh and were met by the Two Fish boat in Manado, we knew the names of the boat men that were picking us up and it was just natural to sit down and catch up on what we had seen and what they and their families were up too.

Rofino and Vande are two young men who work at Two Fish and are going through dive training to become dive guides. I got to assist during their Discover Diving and Open Water courses and Sara will assist during their Advanced course. It was so great to watch their progress while assisting them and see how they now act around me. Being the new guys and on the younger side, they are at the bottom of the list. Yet now when they see me coming, I get the big smile and hello from them too. They are also always trying to push me off the boat, but that is not going to happen. They plead with me as I hold them helplessly over the side of the boat, threatening to drop them. But I don’t, at least not yet…..

More and more now we are taking on the roles of assistants and representatives of the resort. We do dive briefings on the boat as well as new guest dive briefings. The other guests look to us with questions and guess what. In most cases we have the answers. But the assisting with the students in the courses is the most fun, Watching Sara as she helps a new diver get past a skill that is troubling them is amazing, She has a huge heart and loves to teach and this seems to be a match made for her.

I had the best experience yesterday with a Discover Scuba Diving student. Discover Scuba is a program that allows a person to go through a minimum of training and expense and still get to go out in the ocean and experience a scuba dive. Sara and I were assisting an instructor and after a pool session, we all went out on one of the boats for a real dive. I was buddied up with a guy name Simon and Sara was buddied up with his girlfriend . To be honest, they both had seemed a bit nervous in the pool and were kind of quiet on the boat ride out. After explaining a back roll entry into the water I proceeded to demonstrate said back roll entry and waited for them in the water. Simon went through the pre dive safety check and then made the entry into the water. I wasn’t sure what to expect when he came up to the surface, but I asked if he was ok and he replied that he was flipp’in great!. He said he had just fulfilled a life long dream and thanked me for helping him do so. Funny, I didn’t do all that much, but the look on his face sure made me happy. I told him that I was more than happy to help but not to forget, this is only the beginning, we are still on the surface, it gets better, way better!

I had forgotten my first dive, the joy and amazement I felt as I swam around looking at the underwater world from so many new angles. Simon reminded me of that with his enthusiasm as he swam from one point to another wanting to see it all and more. So while it was not the easiest dive for me at times, it was well worth any and all effort on my part as I was rewarded with Simons enthusiastic thank you’s when we surfaced. The truth be told though it is me that owes Simon a thank you for showing me what I have to look forward too as I progress in diving and get the opportunity to show more and more students what it has to offer.

This morning as I prepared to help load the boat I was surprised to see Dolfi as it was he day off. We exchanged good mornings and he stepped closer. He took my hand and shook it, then explained that this afternoon he and his family were christening his youngest child. They were having a party afterward to celebrate and he wanted to make sure that Sara and I knew that we were invited.

So, while this place will not be our home forever, as we will move on at some point and continue both our education and our grand adventure, For right now, with the woman I love, Bunaken and Two Fish Divers is home.