This week in Bunaken… We did a small contribution to protecting the coral reefs around Bunaken this week with some underwater gardening – we were building coral reefs! In a joint project with the Indonesian Navy, the Two Fish staff as well as staff from another Bunaken dive centre, spent a day building large artificial reefs.

Table-looking metal structures with metal rods stuck in concrete created the base. Pieces of broken, but still alive, corals that had been collected off the nearby reefs (only already broken coral was collected – no coral was harmed during the production of this movie… ehum… artificial reef!) were then tied to the metal rods. This created a large area for the coral to grow and for sponges and other corals to grab on to and start growing on. 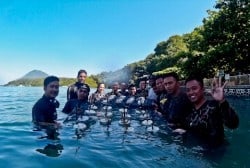 The structures were then lowered to the seabed close to the dive site Subsee (if you have been to Bunaken you might recognize the name – it’s where the mandarin fish hangs around) and divers got busy securing them in the sand so that nothing would be moved by strong weather. Quite hard work as the metal structures were pretty heavy, but lots of fun as well. Even captain Hendika made a rare appearence on scuba to give a helping hand!

It will be interesting to follow the progress of these artificial reefs and it was very nice to see that already when the last divers were about to ascend some fish came to check out their new houses.

It has been a bit windy this week, but that has not put off the divers who has been rewarded with great dives as usual. And the wind has even been quite welcome as the sun has been shining every day from clear skies – the breeze is nice! The divers have been treated to tiny little ghost shrimp, crinoid shrimp, pink squat lobsters, leaf scorpion fish and pontohi pygmy sea horses as well as chunky black tip reef sharks, napoleon wrasse and giant trevallies.