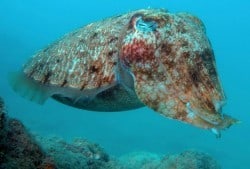 This week in Nusa Lembongan… A cuttlefish has been spotted at Crystal Bay. Hidden in the sandy area of the dive site, a small cuttlefish has been found by our dive guides. This expert of camouflage is able to change its colouring to help it blend into its surroundings. With the sand being soft, it is able to wiggle its way sightly into the sand to help camouflage itself even more!

Cuttlefish are sometimes referred to as the “chameleons of the sea” because of their remarkable ability to rapidly alter their skin color – this can occur within one second. Cuttlefish change color and pattern (including thepolarization of the reflected light waves), and the shape of the skin to communicate to other cuttlefish, to camouflage themselves, and as a deimatic display to warn off potential predators. Under some circumstances, cuttlefish can be trained to change color in response to stimuli, thereby indicating their color changing is not completely innate.[23]

As well as being able to influence the color of light as it reflects off their skin, cuttlefish can also affect the light’s polarization, which can be used to signal to other marine animals, many of which can also sense polarization. It has been suggested that although cuttlefish (and most other cephalopods) lack color vision, high-resolution polarisation vision may provide an alternative mode of receiving contrast information that is just as defined.

There are three broad categories of color patterns – Uniform, Mottle and Disruptive. Some researchers have suggested that cuttlefish can display 12 to 14 patterns, 13 of which have been categorized as 7 “acute” (relatively brief) and 6 “chronic” (long-lasting) patterns. although other researchers suggest the patterns occur on a continuum.

Cuttlefish are remarkable for how quickly and diversely they can communicate visually. To produce these signals, cephalopods can vary four types of communication element: chromatic (skin coloration), skin texture (e.g. rough or smooth), posture and locomotion. Changes in body appearance such as these is sometimes called polyphenism. The common cuttleﬁsh can display 34 chromatic, six textural, eight postural and six locomotor elements, whereas flamboyant cuttlefish use between 42 and 75 chromatic, seven textural, 14 postural, and seven locomotor elements. For the Caribbean reef squid (Sepioteuthis sepioidea), it is thought they have a “language” with up to 35 distinct signalling states, i.e. “words”.