Tale of an Impromptu IDC 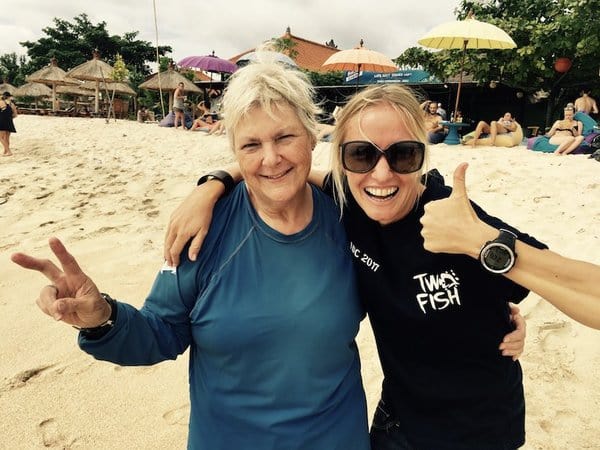 “Sometimes the best decisions happen when you just say let’s go for it.” Marie-Lise Roux used this phrase when she invited us to attend a second Instructor Development Course (IDC) that Two Fish Divers added to be taught in Lembongan. She explained in her e-mail that due to the popularity of the last IDC, a second IDC was being scheduled to start at the end of June in Lembongan. So this is literally how Kathy, my wife, decided to take the IDC course and I decided to complete the Staff Instructor Course.

But first, how did Kathy and I end up in Bali? We are on an extended retirement vacation. I retired as a physical therapist on April 14th of this year and hopped a plane for the Philippines on April 17th with a follow-on trip to Bali. We traveled around the Philippines diving Puerto Galera, Dumaguete, Moal Boal and Anilao. Then we flew into Bali to dive Pemuteran, Tulamben, and Amed. A trip of a lifetime.

While traveling in the Indo-Pacific, we had discussed what we may be interested in doing in retirement. We decided that we would like to work in the dive industry either in the Florida area or possibly along the Mexican Riviera between Cancun and Tulum. To that end, I was looking for an opportunity to expand my teaching credentials. I become a PADI Open Water Instructor 3 years ago and wanted to complete the Staff IDC Instructor course. Kathy had been a Divemaster for 4 years and felt it was time to step up to become an instructor. 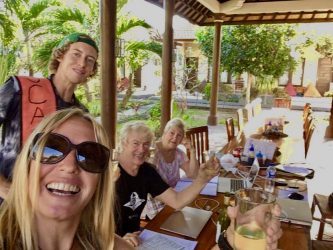 Fast forward to meeting Marie. On 1 June, we arrived at Two Fish Divers in Lembongan, two days before the first IDC class began. It was great meeting the candidates and the energy that they had. We were especially impressed with Marie-Lise Roux, the IDC Course Director. We were still in vacation mode with plans for a follow on trip to Lembeh with Two Fish Divers. I had asked Marie about next year’s IDC schedule in Bali. My tentative plan was to use the opportunity to attend the Staff IDC course as an excuse to return to Bali next year. My wife also wanted to take a year to prepare for her IDC. We did not think any more about the conversation until a week later when Marie sent us a message entitled Second IDC added at Lembongan.

We were on our way to Bunaken when I told Kathy about Marie’s email. We spent the next two days talking about our options. Kathy and I decided to “go for it.” Part of our decision was based on the fact that we had just completed 130 dives in the last two months and knew our dive skills were rock solid.

Then the work began. We were scheduled to return to the States in six days. We needed to leave Bunaken early in order to get a flight back to Bali and to extend our visas. We also had to cancel the flight to Jakarta and change the departure date for the return flight to the States. We then contacted friends and family to let them know about our decision to stay another two months in Bali. And most importantly, we needed to coordinate with the person watching our dog. 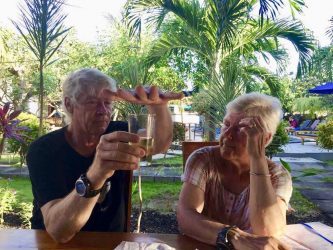 Once we finally started the class, the next two weeks of the course flew by. For Kathy, her challenge was physics and for me the challenge was learning the PADI presentation assessment forms and slates. We learned a lot. We could hardly believe that it was time for Kathy to complete her IE.

I finished my course with the end of the IDC. She was well prepared for her IE, but very nervous. She was successful in all of the presentations and skills. She became an instructor on July 13th. The oldest student Marie has ever taught. We would especially like to thank Marie for her teaching and for her belief that Kathy had the ability to become an instructor. Secondly, we would like to thank the staff at Two Fish Divers for their support. 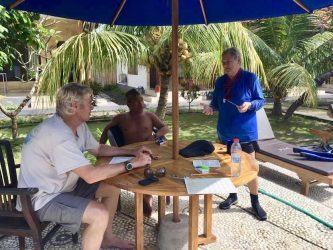 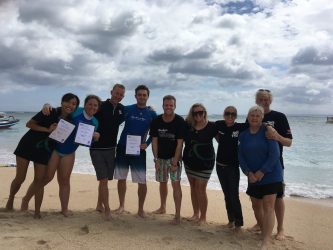