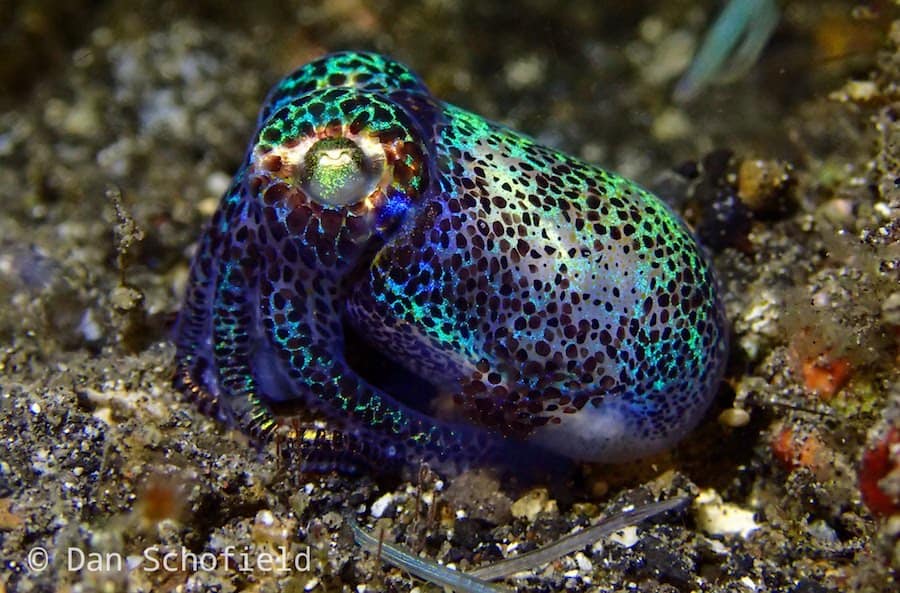 The Bobtail squid (pictured: Euprymna berryi) features on many divers’ tick lists for its sheer beauty.  Shrouded in an ethereal cloak of sparkling colours you will need to plan a night dive to find this tiny cephalopod.  Often the first thing you will notice is a small ink cloud in your torchlight and if you look around quickly enough you may see it plummeting towards the seafloor.  The favoured hiding technique of the bobtail squid is to scoop sand over themselves while wriggling down in a pretty adorable manner.

While divers may prize the bobtail squid for its photogenic, kaleidoscopic cloak of colour, many other creatures may not even see it coming!  Bobtail squid are content to hide during the daytime because they have a very specialized nocturnal skillset.  The glowing body colours are caused by a symbiotic relationship with bacteria.  The bacteria benefit from sugars in the squid’s body while the squid is able to manipulate the bacteria’s light intensity depending on the brightness of moonlight and starlight filtering through the dark water.  In order to do this, the bobtail squid even has reflector cells present in its skin that originally evolved in its eyeball!

This awesome skill makes the tiny bobtail squid highly prized by a number of different researchers from the US Air Force looking at spy-plane camouflage to scientists studying the evolution of symbiotic bacterial relationships (the bobtail squid is unusual in having a monogamous relationship with a single type of bacteria, unlike other creatures which can have hundreds or even thousands).

We’ve had lots of night dives this week, with night dive fiend Chris diving every single one of them (and looking good in his sweet new sidemount gear)!  We also said farewell to Brigitte who has been staying for ages while she completes her online studies between dives.  We’ve had plenty of other guests transferring between Two Fish Bunaken and Two Fish Lembeh experiencing the best of both worlds with the world’s best wall diving and the world’s best muck diving rolled together into one amazing dive package!  Did you know you can book combination packages between multiple Two Fish Divers resorts?  For more information about diving in Lembeh Strait or in any of our other Indonesian dive locations (Bunaken, Bali, Nusa Lembongan, Gili Air or South Lombok, contact us below!